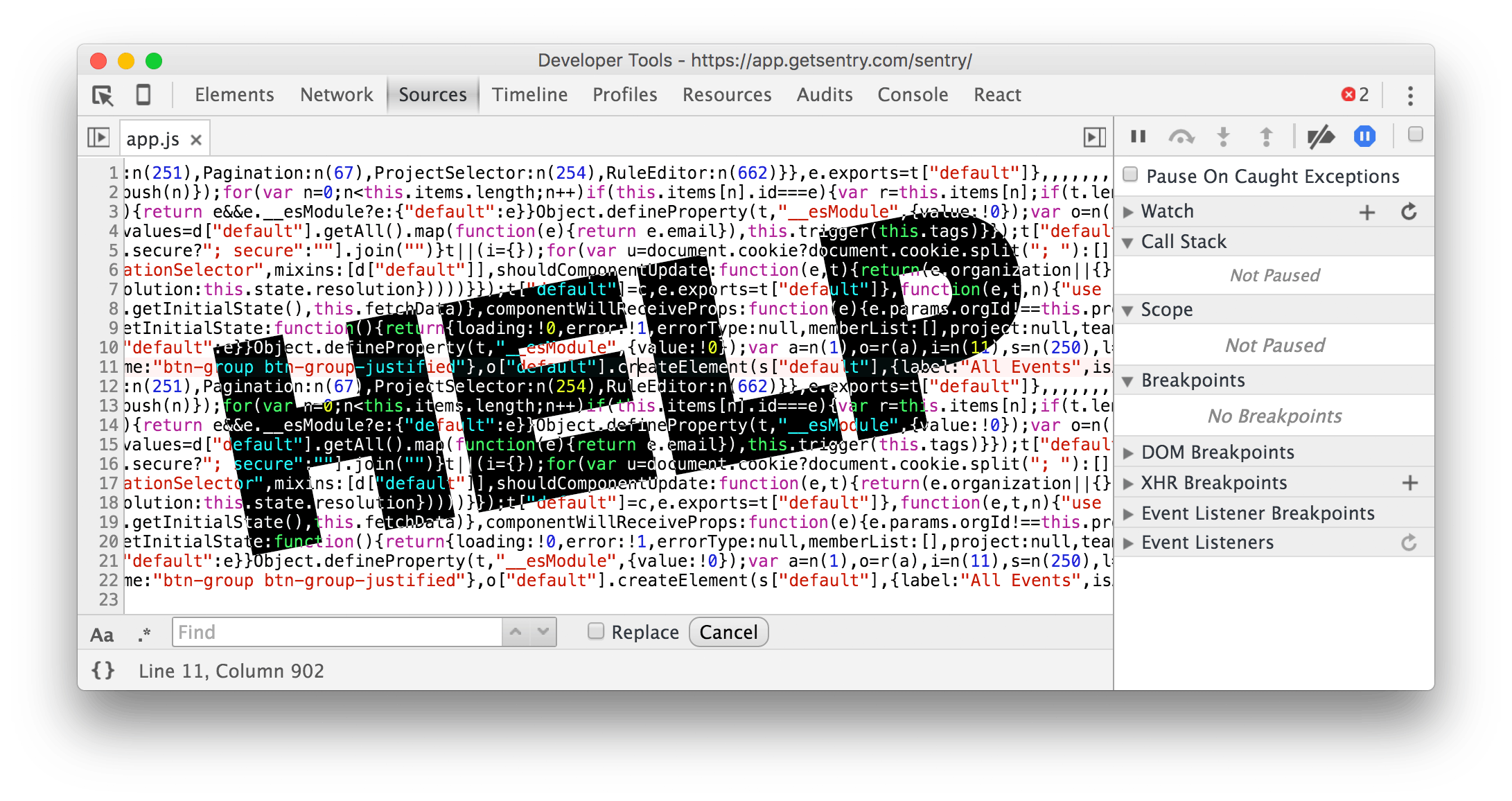 These days, the code you use to write your application isn’t usually the same code that’s deployed in production and interpreted by browsers. Perhaps you’re writing your source code in a language that “compiles” to JavaScript – like CoffeeScript, TypeScript, or the latest standards-body approved version of JavaScript, ECMAScript 2015 (ES6). Or perhaps more likely, you’re minifying your source code in order to reduce the filesize of your deployed scripts. Say, by using a tool like UglifyJS, or Google Closure Compiler.

Such transformation tools are often referred to as transpilers – tools that transform source code from one language into either a) the same language, or b) another similar high-level language. Their output: transpiled code, that while functional in the target environment (e.g. browser-compatible JavaScript), typically bears little resemblance to the code from which it was generated.

This presents a problem: when debugging code in the browser, or inspecting stack traces generated from errors in your application, you are looking at transpiled and (typically) hard-to-read JavaScript. Not the original source code you used to write your application. This can make JavaScript error tracking hard.

The solution to this problem is a nifty browser feature called Source Maps. Let’s learn more.

Source maps are JSON files that contain information on how to map your transpiled source code back to their original source. If you’ve ever done programming in a compiled language like Objective-C, you can think of source maps as JavaScript’s version of debug symbols.

You’ll probably never have to create these files yourself, but it can’t hurt to understand what’s inside:

If this seems like a lot to know – don’t worry. We’ll explain how to use tools to generate these files for you.

To indicate to browsers that a source map is available for a transpiled file, the sourceMappingURL directive needs to be added to the end of that file:

When modern browsers see the sourceMappingURL directive, they download the source map from the provided location and use the mapping information inside to corroborate the running client-code with the original source code.

Note: Browsers only download and apply source maps when developer tools are open. There is no performance impact for regular users.

Okay, we know how source maps roughly work, and how to get the browser to download and use them. But how do we go about actually generating them and referencing them from our transpiled files?

Good news: basically every modern JavaScript transpiler has a command-line option for generating an associated source map. Let’s take a look at a few common ones.

UglifyJS is a popular tool for minifying your source code for production. It can dramatically reduce the size of your files by eliminating whitespace, rewriting variable names, removing dead code branches, and more.

If you are using UglifyJS to minify your source code, the following command (from UglifyJS 3.3.x) will additionally generate a source map mapping the minified code back to the original source:

If you take a look at the generated output file (app.min.js), you’ll notice that the final line includes the sourceMappingURL directive pointed to our newly generated source map.

Relative URLs aren’t the only way of specifying sourceMappingURL. You can give Uglify an absolute URL via the --source-map-url <url> option. Or you can even include the entire source map inline (not recommended). Take a look at Uglify’s command-line options for more information.

Webpack is a powerful build tool that resolves and bundles your JavaScript modules into files fit for running in the browser. The Sentry project itself uses Webpack (along with Babel) to assemble and transpile its ES6 + JSX codebase into browser-compatible JavaScript.

Generating source maps with Webpack is super simple. In Webpack 4, specify the devtool property in your config:

Now when you run the webpack command-line program, Webpack will assemble your files, generate a source map, and reference that source map in the built JavaScript file via the sourceMappingUrl directive.

Up until this point, all of our examples assume that your source maps are publicly available, and served from the same server as your executing JavaScript code. In which case, any developer can use them to obtain your original source code.

When a non-team member visits your application with developer tools open, they will attempt to download this source map but get a 404 (or 403) HTTP error, and the source map will not be applied.

If you use Sentry to track exceptions in your client-side JavaScript applications, we have good news: Sentry automatically fetches and applies source maps to stack traces generated by errors. This means that you’ll see your original source code, and not minified and/or transpiled code.

Above: A stack trace in Sentry mapped back to its original ES6 + JSX source code.

Basically, if you’ve followed the steps in this little guide, and your deploy now has:

Then there’s nothing more to do. Sentry will do the rest.

Alternatively, instead of hosting source maps yourself, you can upload them directly to Sentry.

Why would you want to do that? A few reasons:

For more information on uploading source maps to Sentry, check out our official documentation.

You just learned how Source Maps can save your skin by making your transpiled code easier to debug in production. Since your build tools likely already support source map generation, it won’t take very long to configure, and the results are very much worth it.

Happy debugging. Whether you want to debug Ember, do React error tracking, or handle an obscure Angular exception, we’ll be working hard to provide the best possible experience for you and your team with Sentry!